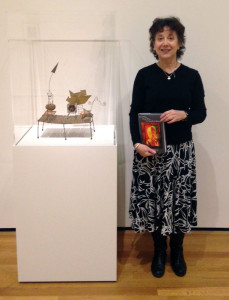 This website is a roadmap of my writing, although I am aware that much of the story takes place in the spaces in-between.

In the U.S., I have moved from San Francisco to the sunny Southeast, and from Hawaii to the grey skies and cultural splendor of Cleveland.  I grew up in Louisville, Kentucky and St. Louis, Missouri in a family of social workers and musicians. (I am the sister of jazz musician and composer Marty Ehrlich, and I was a member of the Waseda University/Tokyo Classical Guitar Society.)

As a student I lived on the island of Shikoku (Japan), on a kibbutz in the Galilee (Israel), in Kyoto, and in India. My M.A. degrees are from the University of Michigan and Southern Illinois University. I was fortunate to spend four years at the University of Hawaii sponsored by a doctoral grant from the East-West Center.  My Ph.D. program brought me into contact with people across the Asia-Pacific region.

My involvement with Film Studies extends back to the time when I assisted with the Hawaii International Film Festival. Wherever I have traveled—Bangkok, Madrid, Tokyo, Chennai, Rio de Janeiro, Tel Aviv, Cape Town, Barcelona—I have interviewed directors, cinematographers and actors; viewed archival films, and visited film studios. I deeply appreciate the warm welcome I have received from members of the film communities in those countries.

At the University of Tennessee/Knoxville (as Asst. /Assoc. Professor), I curated a three-city Asia-Pacific Film Festival, co-sponsored by the East-West Center. At Case Western Reserve University (as Associate Professor), I curated film series on “Childhoods,” and on “Rarely Seen Japanese Cinema,” co-sponsored by the Cleveland Cinematheque and the Japan Foundation. Drawing on my interest in world dance, I have designed and taught courses on: Dance on Screen, Shadowplay/East and West, Understanding Dance, and Asian Theatre and Cinema, among others. I taught two semesters on the Semester-at-Sea program. An especially fortunate grant allowed me to spend three weeks in a special artists’ colony, the Liguria Study Center (Bogliasco Foundation) near Genoa, Italy, and later to co-coordinate a small conference there.

Moving between Asia and southern Europe seems to suit me. In my writing I try to remain sensitive to “trailing notes” (from Japanese music) and to “dark sounds” (from Spanish music). My writings about the Japanese director KORE-EDA Hirokazu, and my commentary on a restored DVD/Blu-ray of his first film Maborosi, complement the writing and commentary I did in earlier years about the films of Spanish director Víctor Erice. I am now also exploring the hybrid genre of the lyric essay.

Currently I have completed a new collection of writings inspired by the Japanese Noh theatre (Yamamba’s Mountains), and another on world music, entitled Strings. I now move between the writing of essays, childrens’ books, and poetry.

Image above taken at Cleveland Museum of Art. Sculpture by Juan Luis Buñuel.