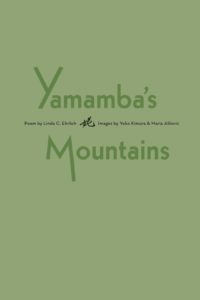 These writings are inspired by the medieval-period Japanese Noh play Yamamba, and by Ohba Minako’s short story “Smile of a Mountain Witch” which contemporizes the Yamamba legend.   Yamamba (sometimes written as “Yamauba”) is an elderly figure who is alternately described as a “witch” or a “holy spirit.”

The first act of the Noh play presents a priest and dancer on pilgrimage to Zenkōji Temple (literally “Temple of the Good Light”) who encounter a powerful and ambiguous figure of an old woman in the mountain. The travellers comment on the strange changes in Nature that day, with the sky suddenly darkening. By the second act, the old woman has exited and returned to reveal herself fully as Yamamba, her true self, with matted white hair and a reddened face,

Yamamba is a paradoxical figure. She aids the woodsman and the weaver, but also hides the sun behind storm clouds and frightens the traveller. Stamping the ground, pointing to the center of the earth with her fan, Yamamba leans on her cane (decorated with evergreen leaves) and shares with us her journey as she traverses the mountain paths, in pain.

With images by Yuko Kimura and Maria Alilovic.  Calligraphy by Kayo Ohmori